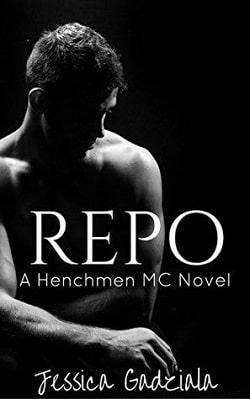 In concept, the plan was simple: prospect at The Henchmen MC. In practice, however, it was anything but. One, because I was a woman. Two, because it was a brotherhood. And three, because Repo, the man who was in charge of making my life a living hell until I quit or screwed up enough to get thrown out, also happened to be the hottest guy I had come across in ages.

The problem was, if I didn't get in and stay in despite the hazing from the members and the undeniable attraction building between me and Repo, there was a very good chance I would be found by them. And if I was found by them, well, I was dead.

How the hell was I supposed to get her out of the MC when, one, I didn't agree with the fact that because she was a woman, she had no place in The Henchmen. Two, because she was strong, smart, capable, and determined to get a patch. And three, because, well, I wanted her.

The problem was, if I didn't get her kicked out, I would be screwing up a job that was important to the prez. But the problem was also that if I kicked her out, there was no way I was going to get a shot with her.

I didn't know, however, that the real problem was a lot more complicated and a lot more dangerous than disappointing my boss or not getting laid... the problem was Maze had demons and they were hot on her trail...

* This can be read as a stand-alone and has an HEA but has side characters from the other Henchmen books.