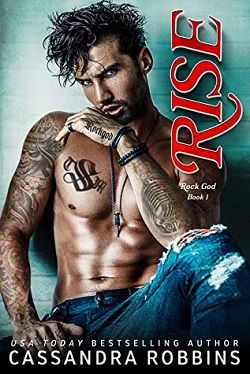 I know what I want.

So when opportunity knocked, I took it. I grabbed my shot, willing to do anything to make it happen.

From the beginning, I knew I was destined to be with the six-foot-four, bourbon-eyed Rock God. Only back in the early days he wasn’t a god.

Rhys Granger was my brother’s friend, the boy next door who wrote verses and played his guitar in our garage. He was talented. Exciting. Damaged. The kind of guy who made all the girls cry…

Except for me. I thought I was special. Turns out I’m not.

And now… I despise him.

He’s the lead singer of the Stuffed Muffins, one of the biggest bands in the world, with dark hair, full lips, and a body to die for.

Not that I care anymore. I have my own career. I’m successful in my own right. So, when offered another once-in-a-lifetime opportunity, I turn it down.

But the universe has other plans, and I’m forced back into the savagely glamorous world of rock ‘n’ roll. Thrust into battling his seductive smile, his dangerous kisses, and my own addictive needs.

He might be a Rock God, but he’s also a man. And I’m the woman he never saw coming.