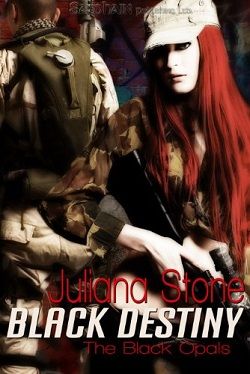 She will protect him at all costs, even if it means her life.

Undercover, deep in the heart of enemy territory, Lily Black has been charged with a mission: guard the life of Kerr Strome.

Like her warrior sisters, the Black Opals, Lily is a time traveller who shifts wherever she’s needed. She’ll do whatever it takes to foil an assassination attempt on Kerr by The New Order. There’s only one way to fly under his radar: pose as a man.

Kerr Strome is a warrior with his back to the wall. His planet is in chaos, his life threatened at every turn. The safe evacuation of his people from their war-ravaged planet depends entirely on his team of elite soldiers—and their ability to lie low for the next few days. The holding pattern might make him crazy, except for the intriguing new team member. A small soldier with big-time fighting skills, and something extra Kerr can’t quite figure out.

When Lily intercepts a New Order assassin—and a bullet meant for Kerr—her cover isn’t all that’s blown. Their pent-up desire reveals a bitter truth. The reason Kerr is marked for death? He is Lily’s destined mate. And the only way to save his life is to give her own.