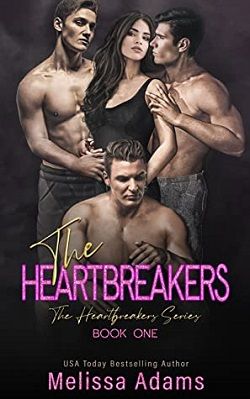 “Stay away from the Cove Devils, they’re bad news. Everyone calls them the Heartbreakers for a reason.”

The rival skydiving teams- the Cove Angels and the Cove Devils - have been at each other’s throats since the Devils came to Star Cove.

I’ve been the Angels biggest fan forever. First, for my dad, captain of the Angels and a skydiving legend, and then for his heir and my best friend, Darrius

Only my feelings for Darrius run deeper than just friendship and I can’t keep that secret to myself. That was my first mistake.

When Darrius rejects me, breaking my heart beyond repair, his three rivals - the Cove Devils one and all - are there to help me pick up the pieces. Is this my second mistake?

I want revenge against the man who broke my heart. The Devils want to destroy their rival.

But can I trust the Devils—The Heartbreakers—who are hot and dangerous and have everything to prove? Or will I lose more than my heart in this deal?