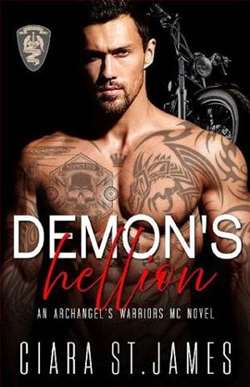 Demon is a confirmed ladies’ man. He has no reason to change that. Or he doesn’t until he meets the fiery Zara across a hospital room. His immediate attraction quickly turns to thoughts of cherishing, protecting, loving, and having a forever family with Zara. She’s more than just a beautiful, sexy woman. She’s smart, driven, and strong, yet in some ways, vulnerable. Unfortunately, she also seems to be the one woman who doesn’t fall at his feet. He has to rethink his whole approach.

Zara, as a doctor, is confident—as a woman, not so much. Now, she finds herself feeling overwhelmed and maybe a little obsessed with her thoughts about the sexy biker. He tests her self-control. Yet, she thinks she can’t trust him with her heart. Should she risk the heartbreak, she’s positive will come? He’s more than his sexy body and handsome face. He’s intelligent, loving, and has a sense of humor. And he says he wants a family.

Each of them haunts the other’s dreams. He’s out to prove he’s her man, now and forever. She doesn’t play games, and she’s convinced those are Demon’s specialty. She refuses to be another toy. Conflicts arise that make her doubt his sincerity and send her straight into danger. Demon is going to do whatever it takes, even plan an invasion, to get the woman he loves back. Nothing will stand in the way of Zara taking her place as Demon’s Hellion.