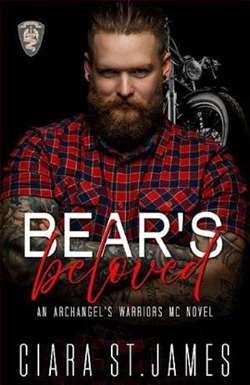 Bear has lived more than half his life for his club. He’ll gladly do it again. He has never regretted starting this club with Bull and a few others years ago. However, seeing his brothers finding love and settling down to have families when he knows he’ll never have that is taking its toll on him. He takes off to get his head straight.

When he returns, a chance meeting on a sidewalk in town brings a beautiful woman and her little girl into his life. He’s instantly struck and wants to find out more about her. However, if she doesn’t find a job soon, she’ll be leaving. As he tries to help with that, he’s called to town one night and makes a disturbing discovery about Ilara and her daughter, Hope.

He thinks when he gets them in his home, he’s home free. That is only the beginning. He finds horrors in her past, and danger in the present and he’ll have to fight to keep his new family intact.

Ilara is desperate to find a place she and her daughter can settle down and be safe. She hopes Hunters Creek was the place, but things aren’t looking too good. Then she literally runs into a bear of a man, who of all things is called Bear. He should terrify her, but he doesn’t. It’s her past that does that.

When Bear takes her into his home and explains he wants a family and what that will entail, she’s left deciding if she can fulfill that dream. She thinks she might. Then things are blown apart by more than one revelation. One of the worst being, she could lose her daughter.

Bear and Ilara have to fight not only for each other but for their happily ever after. Bear gains more than he ever imagined when he found Bear’s Beloved. He’ll show the enemy why he’s called bear to protect his family.