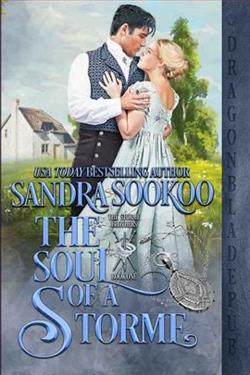 The Soul of a Storme (The Storme Brothers 1)

The Soul of a Storme (The Storme Brothers 1)

Andrew Charles Storme—ninth Earl of Hadleigh—has been in a monstrous temper for the better part of two years. Unable to join the fight against Napoleon due to the declining health and subsequent death of his father, his rotten mood worsened when his two brothers survived the war with life-changing injuries. Ashamed, Drew retreats to his country estate in Derbyshire to spare them his ire. Why the devil was he not worth more than his title?

Miss Sarah Copeland is a poor relation. In exchange for room and board, she’s become the governess to her great-uncle’s two rambunctious offspring. It was better than being tossed in the street, but only just. Freedom and imagination are found in playing a flute, especially since dreams of her future died long ago. When she meets her handsome, growling neighbor, she believes she’s finally found her purpose. After all, didn’t music soothe the savage beast?

While Drew battles with his guilt and anxiety, he finds safety and solace in Sarah’s company. As they enter into a surprising marriage of convenience, the earl’s temper slowly begins to improve, as does her outlook. But while an unexpected romance blooms over the summer weeks, responsibility to the title rears its ugly head, and his temper flares anew, threatening to tear apart everything they’ve built.

Only patience, trust, and love will see them through to a happy ending.