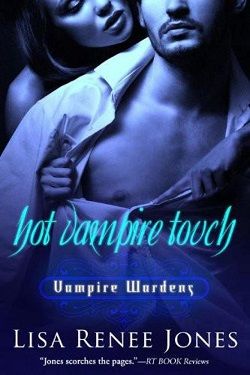 The Wardens series begins with a trilogy of three brothers—Evan, Aiden and Troy Brooks are brothers (in order by human age: 34, 32, 28), who were early settlers of the town of New Braunfels, Texas, in the 1500s. When the town was haunted by a series of brutal animal attacks that left a half-dozen townsmen murdered, the Brooks brothers took things into their own hands. Armed and ready for action, they set out into the wilderness, determined to find this animal and kill it. What they found was a female vampire who decided the brothers were scrumptious morsels, worth keeping around for a lifetime. She attacked the brothers and turned them to vampires.

No sooner did she turn them, though, than another vampire appeared and killed her. This vampire declared himself a “Warden” of the Vampire Council. Wardens uphold the rules of the Vampire race, and report to the Council. Killing humans is punishable by death, and their ‘Maker’ had broken that rule. The brothers were then taken to the Council, where they were taught how to survive without killing, how to mingle with humans as if one of them, when to move on from a location so that they would not be suspected as vampires, and most importantly, who their enemies were and how to defeat them.

In the end the brothers were granted a financial dowry that had belonged to their Maker and given the choice of freedom, under Council rule, or an alternative—to become Wardens.

Now, the brothers travel together as Wardens, tracking outlaw vampires, killing them, and protecting innocent humans. It is their eternal duty.