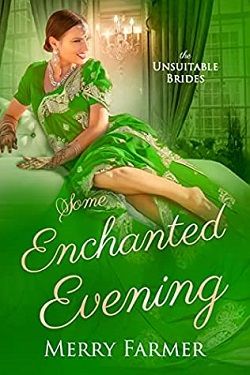 The Marquess of Vegas made a deal with the devil, and now his sons must pay the price.

In order to restore the family fortune he lost, Lord Vegas has ordered his sons to marry money, and to marry it fast. But the four of them are determined to strike back at their father by marrying the most unsuitable brides they can find...

Lord Francis Rathborne-Paxton, Earl of Cathraiche, is the oldest, most serious, and most responsible son of the disgraced Marquess of Vegas. But that doesn’t mean he won’t join his brothers in seeking out the most unsuitable bride he can possibly find as a clever means of revenge. He fully intends to damage the family’s reputation as much as he can…but in the classiest way possible. Which means that only a princess will do for him. The daughter of an Indian Maharaja, for example.

Rani Priya Narayan was sent to London by her father, the Maharaja of Koch Bihar, to study and learn the refinements of the British ruling class. What Priya has actually learned is to be an outspoken critic of British rule in India and a hoyden who believes that women should have the right to vote and determine their own lives. The last thing she has time for is a devilishly handsome earl with an agenda of his own.

Francis has his work cut out for him when it comes to winning Priya’s approval, let alone her hand in marriage. Because Priya has a secret she hasn’t revealed to anyone, and that secret is on his way to England. Francis’s plot to win her over might win her heart, but that doesn’t make it possible for them to be together. You never know what might happen when two stubborn enemies-to-lovers who were both born to lead end up in a sticky situation on some enchanted evening….