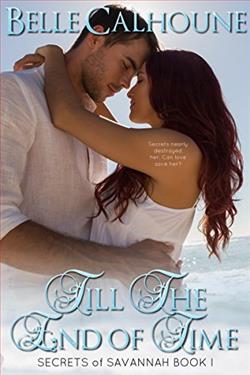 Till The End Of Time (Secrets of Savannah 1)

Till The End Of Time (Secrets of Savannah 1)

Secrets of Savannah: Six best friends who have known each other their entire lives. Once as thick as thieves, the friendships among the girls have been splintered by life events, secrets and deceptions. Now, brought together again by an inheritance of an historic Bed & Breakfast on Tybee Island, the women must set aside their differences in order to restore their beloved Savannah House. As each woman finds her special talent and develops it through the renovation of the inn, they also find romance—each of them with an unforgettable hero.
The princess: Callie Duvall was raised in the lap of luxury in Savannah, Georgia after being adopted by the Duvall family at the age of five. When she discovers that her biological brother, Mac Donahue, is alive and well, despite having been told as a child that he was deceased, Callie realizes her life as a Duvall has been built on a foundation of lies. Seeking to distance herself from her father and his deception, Callie moves to the guesthouse of Savannah House, the famous resort where she worked summers as a teenager. On the brink of a whole new life, Callie begins spending time with her childhood friend, Jax Holden. Jax is funny, tender and sweet. But Callie isn’t sure she can deal with her growing feelings for him. Life has taught her that love is a dangerous emotion and she can’t help but fear that falling for Jax will make her world unravel.
Businessman Jax Holden has been in love with his childhood friend, Callie Duvall, for as long as he can remember. For many years, Callie has viewed Jax as nothing more than a thorn in her side. Now, he’s determined to win the love of the one woman who owns him heart and soul. As the two begin a relationship, Jax begins to feel Callie thaw toward him. But when Jax’s employment with Duvall Investments, the company Callie’s father owns, places him at odds with Callie, he’ll have to fight to win Callie’s love. Can Jax convince Callie to give their love the chance it deserves?