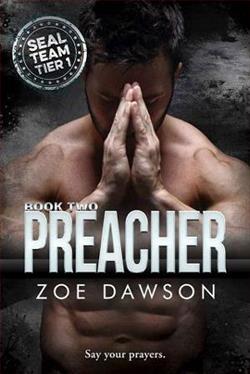 Preacher and the team are sent to Bolivia to investigate the next attacks on Americans on Foreign soil from the No Safe Haven terror group. He and the team are tasked to work with the CIA and DEA, including the woman he’s wanted since he met her. He hadn’t expected to see the beautiful, exotic Karasu again, but, nevertheless, she hasn’t been far from his thoughts. He’s still working through his own demons, still celibate. The question is does he want to remain that way as the tension inside him builds. Could his way be clearer with physical contact? What more could they hope to have in the secret and covert world they live in?

Karasu hasn’t ever forgotten the man who had bested her in more ways than one. He still presented a huge challenge both physically and more terrifyingly, emotionally. Her past is fraught with ugly secrets and shameful acts that shaped her into the killing machine she has become. Can she break away from the shadowy world she has pledged her life and energy to for so long? How does a woman who has given everything for the agency find another path?