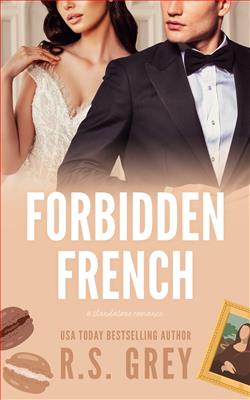 Once upon a time, Emmett Mercier was the golden boy of St. John’s Boarding School. The crown prince of his father’s vast business empire, unapologetically attractive…oh, and fluent in French.

At school, I kept a picture of him hidden beneath my pillow, a tiny token of my adolescent infatuation, but I might as well have been worshiping a distant demigod. He was hardly aware of my existence. I was far too young, and he was far too consequential—until one day we found ourselves alone together in the dark library and struck up a friendship…of sorts.

But in the years since leaving St. John’s, I’ve no longer bothered yearning for Emmett. What a useless dream. I would have gone crazy trying to keep up with his jet-setting life. Which Parisian hotel is he calling home now? Is there some new lithe model draping herself across his lap today?

My negligence comes back to bite me. I’m ill-prepared the day he strides into my art gallery. There’s only a mere trace of the boy I once knew. Self-assured, handsome, intoxicating—Emmett is more man than I can handle.

There’s no room for him in my gilded cage. My life is planned to a T. From where I go to how I dress, it all depends on the calculated whims of my grandmother. Soon, I’ll even dutifully walk down the aisle toward a man of her choosing.

And therein lies the problem: I was doing just fine without him, but now that he’s rattling the bars of my cage, I’m forced to acknowledge the truth.

Once upon a time, Emmett Mercier was all I wanted. The midnight wanderings, the whispered nothings, the unbearable longing—they etched indelible marks on my soul. Even now, after all these years, my heart is only fluent in one language.
Forbidden French.