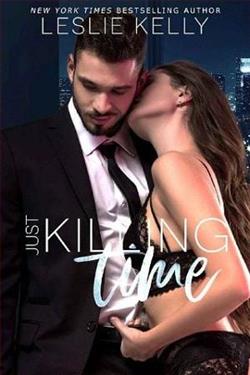 Is This Player Ready for a New Game?

KILLING TIME IN A SMALL TOWN is the name of a new TV show, but it also describes how bad boy Mick Winchester has been feeling about his life. He supposes he deserves his reputation as the Big Bad Wolf, considering his infamous tattoo, but he's a little tired of his wicked lifestyle. Maybe it's time to stop trying to heal a broken heart in the arms of so many women and find just one.

But then a TV show crew rolls into his hometown. The producer is none other than Caroline Lamb...Mick's college lover. Caroline has changed. Gone is the nice southern girl with big-city dreams. This Caroline is a Hollywood hotshot all wrapped up in a thousand-dollar power suit and killer spike heels. And Mick wants her more than ever.

She's Desperate for a Hit

Caroline--Caro--Lamb isn't the ruthless executive she pretends to be. She's just desperate to make her murder-mystery show a hit. She can afford no distractions...and her former lover, playboy extraordinaire Mick Winchester, is one huuuuuge distraction.

Then there's the little problem of a real corpse turning up on the set.

The network bosses are ecstatic. Think of the ratings! But actual murder is way too much reality, even for Caroline. Especially when all clues point to someone very close to Mick Winchester.

With her career on the line, her heart completely vulnerable, and a murder to solve, Caro can't possibly get involved with the sexiest man she's ever known--again! And no way would the consummate ladies' man fall for a woman whose whole lifestyle means she'll be leaving his world very soon.

Love is out of the question.

If only their hearts remembered that.

Just Killing Time is a 100,000 word sexy bad-boy romcom that can be enjoyed as a standalone novel. It was originally published as Killing Time and has been substantially edited and updated.

***
Her teeth clenched and her eyes narrowed as she stared at what the creep had done to the poor little lamb on his hip. Directly across from it, extending from the base of his spine and down over part of his taut left cheek, was a cartoon character. With gaping jaws, a wicked twinkle in its eye and very sharp teeth.

She recognized the character instantly. From the spiky black fur, and the two pointed ears that might, indeed, peek out from a pair of low-riding jeans, to the glistening, salacious smile, the Big Bad Wolf sat silently on this man’s body like a predator watching for some tempting prey.

And he had some. Lamb chops en brochette.

It was funny...but intensely sexual. A literal warning to any lamb to be wary of wolves with big smiles and knowing eyes. She didn’t know whether to drool or kick him.

But what really made her react with gut fury was the realization that her little lamb—the one Mick had gotten during his junior year of college in honor of their first anniversary—was no longer alone. A miniature herd of the furry little beasts marched across his back, waiting for their turn to run willingly into the Big Bad Wolf’s waiting mouth.

And Caroline Lamb had led the way.

She simply couldn’t help herself. With a strangled cry of fury, she half stood and launched herself into the room.

“Do the women of the world a favor and shoot the bastard,” she snarled at Louise.

Then she promptly ruined her grand entrance by losing her battle with gravity and falling flat on her face.