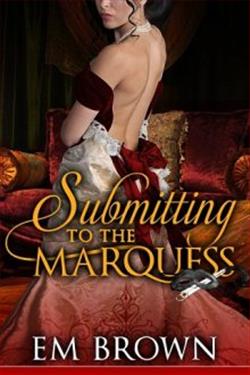 Submitting to the Marquess

Submitting to the Marquess

The Marquess of Alastair is trying to be a gentleman for a change, but this Regency miss won't take 'no' for an answer!

Mildred Abbott is a proper Regency miss, but she cannot deny the dark desires that torment her body in the quiet of night. Engaged to an uninspiring sycophant, she asks the influential nephew of her patroness in debauchery to interfere and break her engagement. When her appeals to him fail, she decides to take a singular opportunity—a visit to the Château Debauchery—to indulge her most wanton cravings before she submits herself to a life of wedded dullness.

The Marquess of Alastair concerns himself with no one, but to appease his aunt on her birthday, he agrees to select one person whose interests he will look after. It was not his intention to choose the plain and simple Miss Abbott, but when she unexpectedly shows up at the Château Debauchery, his hand is forced. Knowing his aunt to be partial to the miss, he grudgingly decides to act the part of a gentleman and preserve Miss Abbott's honor by removing her from the Château.

But Mildred refuses to go until she has had her night of wicked debauchery.