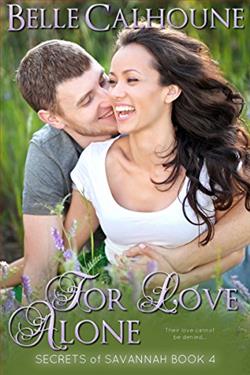 For Love Alone (Secrets of Savannah 4)

Link Copied to Clipboard
For Love Alone (Secrets of Savannah 4)

The Chef: Morgan Lucas grew up in Savannah, Georgia surrounded by the trappings of wealth and privilege. The product of an interracial marriage, Morgan was raised by her mother, Pearl Lucas, after the divorce of her parents. Morgan’s upbringing was loving yet very modest—worlds apart from her best friends. Ever since she was a small child, Morgan has found discovery and self-assurance in the kitchen. For as long as she can remember, Morgan yearned to be a world famous chef and baker. When she begins a secret relationship with Luke Duvall, the brother of one of her best friends, she finds herself falling in love with the sweet-natured businessman. After a confused Morgan decides to end things with Luke, she runs away to Paris to work as a chef. Now back in Savannah and claiming partial ownership of Savannah House, Morgan is determined to make spectacular meals at the resort and make a name for herself in Savannah. And when a chance to reunite with Luke presents itself, Morgan has to face her fears in order to claim her future.

The Renaissance Man: Luke Duvall grew up in a lavish estate in Savannah with his adopted sister, Callie, as the son of wealthy aristocrats, Lionel and Davinia Duvall. Luke’s life has been shaped by a tragic event—the drowning death of his younger sister Rachel while on vacation. A part of Luke has always blamed himself for her death. Now employed by the family business, Duvall Investments, Luke yearns to switch gears and pursue a singing career. But family obligations, and a desire to make his father proud, are standing in his way. Luke is at a crossroads. He’s still head-over-heels in love with Morgan Lucas, but a chasm still separates them. Determined to win the woman of his dreams, Luke sets out to prove to Morgan that they were meant to be.